The truck slowed to a halt around two-thirds of the way to Panajachel, and the driver barked out to us that everyone had to descend. He had heard something ominous on the radio and refused to drive us any further.

“What’s up?” I asked a local as we got down from the vehicle.

“Sounds like another riot,” responded the Guatemalan dourly, “and a really bad one this time!”

Jay and I exchanged uncomfortable glances.

“I don’t know. Crazy stuff like this usually never happens in Pana…”

The Mayans crowded round the radio, and I caught a few disjointed Spanish phrases through the static of the transmission: “…olice have come under massive attack…” “…machetes and…” “…totally out of control…” “…ave set fire to…” “…ear gas everywhe…” “…omplete chaos in the streets…”

It was difficult for me to imagine any of the Guatemalan people I had met so far becoming violent. Jay and I had just come from a idyllic village where we had mingled with the people in the marketplace and he, being a photographer, had taken many wonderful photos.

The driver said he wouldn’t budge until he was sure that the situation had been resolved. So Jay and I decided to walk back to town on our own. We were hungry and needed a meal, and besides, how bad could it possibly be, anyway?

We set off to wander down the road on foot, and the indians who had been in the truck watched us go. Only one local seemed willing to come with us, and he explained a little of the situation.

“It seems like some thieves from the capital came into town and were robbing the locals in the marketplace,” he said. “The people grabbed them and a huge fight ensued. Then the police came in to investigate and the people attacked them too.”

“They attacked the cops?”

“Sure!” spat the Guatemalan enthusiastically. “Everyone hates those corrupt bastards! Sounds like they have even burned some of the patrol cars!”

After a few hundred meters, we noticed that several trees had been chopped down to block the road, and we spotted a thick plume of smoke rising from the direction of the town.

“They worked fast this time,” commented our companion. “They must have cut down these trees to prevent the police from receiving reinforcements. That means the whole damn town is involved. Looks like they mean business.”

We continued our descent, clambering over felled trees and skirting boulders that had been pushed in the path. There must have been about a dozen ad-hoc roadblocks along the path. This was not just a few kids doing some weekend vandalism. This was a major mobilization.

We spotted a ragged group of policemen limping up the path from the direction of the town. They were covered with dust and blood and several had their uniforms torn. One staggered past wearing a blood-soaked turban of gauze that obscured half of his face. They looked miserable.

The man we were walking with asked them what was going on.

“The whole town… rioting in the streets…” panted one of the men as he gasped for air coming up the slope. “Cut to pieces on the sidewalk… they want to burn them alive…”

That doesn’t sound good, I thought.

The policemen rested for a moment and gave us the full story. As we had already heard on the radio, the locals had caught some outsiders stealing from them. One had already been killed by the machete and his body left in the middle of the main street. Three more, apparently pregnant women all, had been tied up and doused with gasoline when the police arrived. An epic battle then took place, as the cops tried to rescue the women before they were burned alive. In the end they had wrested the terrified captives away from the bloodthirsty mob, but not without a monumental struggle.

“Jesus!” I exclaimed. “What were they caught stealing?”

“Some fruit, I think,” responded one of the battered policemen, “or maybe a bit of money, I don’t know.”

The cops moved on and we continued our descent into the maelstrom. Eventually we arrived at the town. All the buildings were locked and shuttered, and the whole place reeked of dissipating tear gas. There was no one in the streets.

A thick plume of black smoke hung over the town, and we walked towards the source. As we approached, we saw a huge mob of Guatemalans gathered in a large plaza. When we had come to about a block from the multitude, we heard a loud crash and the people suddenly started screaming and running in all directions in a frantic scramble that reminded me of New Yorkers fleeing the debris of the twin towers.

A thundering mass of caterwauling humanity stampeded straight at us, and we pressed ourselves against the front of a nearby shop to let the frenzied herd pass.

“What’s happening?” I shouted at someone in the crowd.

“They just set the police station on fire!” exclaimed a woman with a face radiating sheer terror. “They’ve already put city hall to the torch, and now they are trying to burn down the cop shop too! God knows what’s next! I’m getting out of here before the authorities come back!”

Jay tapped me on the shoulder, and I turned to look at him.

“Listen kid, I’ve got a wife and family back home,” he said. “You can take all the risks you want here, but I’d better head back to my hotel.”

I understood completely, and we made quick plans to hook up the following day. He took off and I moved into the centre of the now reformed crowd in the plaza, flanked by the smouldering city hall on one side and the blazing police station on the other. There were a few other foreigners taking in the scene, and the locals barely noticed me as I squeezed through their serried ranks.

I spotted a line of three patrol cars and a paddywagon down the road that had been turned on their sides and set aflame. There were no cops anywhere in sight. They had all wisely gotten the hell out of Dodge after wrestling the three gasoline-doused pregnant women from the mob. 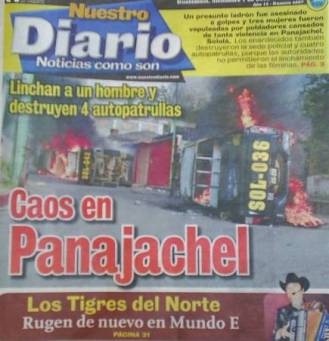 “Where’s the fucking mayor?” screamed one shirtless, gas-smeared man in the middle of the tumult, as he swung a glittering machete over his head. “Let’s burn that worthless son of a bitch too!”

A roar of vociferous approval resonated through the feverish crowd. The people started throwing rocks through the smoky windows of the buildings and cheered every time they heard glass shatter.

Just as the policeman had mentioned, I saw that a charred, hacked-up corpse was laying in the middle of the street, stretched out for all to see. The body had been sliced open and then burned. Two drunken gringo tourists were circling the cadaver on bicycles, joking and laughing at the scene. Then one backed up and took a  run at the dead man, jumping over him with his BMX and shouting in drunken exultation.